When I studied math, I tended to find myself more interested in the “continuous” side of things rather than the discrete. This is calculus and analysis and such, in contrast to things like logic, abstract algebra, number theory, graphs and other things where everything is rather chunky. I suppose I was largely motivated by the use of calculus in physics, which was usually my main focus. It’s easy to see that calculus and continuous functions are essential when studying physics. It’s not as easy to argue for number theory’s direct applicability to an engineer.

Sometimes I feel a bit ashamed about this interest. Calculus and analysis are the next logical steps after real number algebra. One could argue I didn’t allow myself to expand my horizons~~! But, whatever, who cares. They’re still cool. OK? THEY’RE COOL.

It’s very easy to claim that you’re interested in something. It’s almost as easy to hear someone talk about how they’re a fan and try to call them out on it by asking about some trivia. This is often the crux of an argument in the whole “Fake Geek Girl” and Gamergate things.  Similarly, sometimes, it feels like everyone around me is nuts about Local Football Home Team, and I often find myself skeptical of the “purity” of their fanaticism. I need to remind myself that someone can enjoy something and not know everything about it. You can be interested in Watching Football Match and not know the names of everyone (or even anyone) on the team.

The same is true for something like math. It had better be true, since there’s always another thing we could define or discover, and all of the fields already developed aren’t completely understood by a single person. It’s fine to be more interested in one thing rather than another. If you take that too far, you’d end up criticizing people for not being interested in every single thing in existence equally.

It’s all right to wonder if I should look into a certain topic, though. A few years ago, a colleague teaching introductory calculus to high school seniors mentioned that they were working on delta-epsilon proofs in the class. This blew me away! The concept of a limit is usually introduced in a pre-calculus class, or the beginning of a calculus class. I am under the impression that it’s usually a matter of, “yeah, this function gets really close to this point, but doesn’t actually hit it,” and that’s all a student really needs to know until they do some analysis. A delta-epsilon definition is a way to formally define a limit, so there is no uncertainty as to what is actually happening. “Gets really close” ends up being defined exactly — basically, it says, “For this function

, gimme any number bigger than zero, even a SUPER tiny number, and I can give you a distance away from

such that $latex $f(x)$ is never further from a limiting value L than your number.”

Okay, maybe that is not super enlightening. But on a side note, it’s fun to think about how much like a playground taunt that is.

I was ready to argue that his students didn’t need to bother with delta-epsilon proofs, that they could learn to work with the fuzzy idea of a limit first and get along just fine in calculus, just as I had. But, I did start to doubt myself. Should I have learned the definition of a limit before trying to use it, in my hubris?

In retrospect: no, that’s silly. Looking at epsilon-delta definition, I realize it would have taken me ages to get through it, taking away from valuable time spent thinking about the applications of calculus. But, that feeling is there. Should I have known about this?

What does this have to do with Hermitian matrices, you demand, grabbing me by the shoulders and shaking, while my cravat soaks up your spittle.

I had this same feeling this week, when thinking about a topic in linear algebra and physics. In quantum mechanics, matrices are used extensively to describe certain kinds of actions that could be done to a particle or a system. One of those actions could be to take a measurement, such as the amount of energy in the system. If you call your matrix H and your particle current state

, then you could represent a measurement of how much energy the system has by multiplying them together.

When you multiply them together, you can get a single number

as a result. If H measured the energy of the particle, then the value of

is that energy. You can’t just divide both sides by

because a particle’s state is a vector of many possibilities, and division by vectors rather than numbers doesn’t mean a whole lot here. (You can multiply both sides by a vector transpose and get into something called Dirac notation, but don’t bother with that now.)

and the state $\psi$ are called eigenvalues and eigenvectors of…

Is this worth describing? If you don’t know this, it might be incomprehensible. It turns out that if H is Hermitian, meaning, it is self-adjoint:

then it always has real eigenvalues (as opposed to $\lambda$ being a complex number). Physicists interpret this to mean the matrix definitely represents a physical measurement. Hermitian matrices aren’t the only ones with real eigenvalues, but they also have a property that lets you be sure you’ve measured your particle as being in a certain state.

I’ve seen proofs that Hermitian matrices have real eigenvalues. Here are a couple. These start by assuming there is some eigenvalue/eigenvector pair, and using the fact that a vector magnitude is real at some point.

Finding the eigenvalues of a matrix is a matter of solving an equation which involves a determinant:

where I is the matrix identity. I thought, could I use an expanded determinant to show that the eigenvalues have to be real?

the characteristic equation is

You can show the two solutions for

have to be real by shoving all these numbers in the quadratic formula. The discriminant (remember that?) is positive because it ends up being a sum of squares. I’m bored.

My thought after this point was to use mathematical induction. We’ve shown that an

Hermitian matrix has real eigenvalues. Let’s show that an

one does as a consequence.

Maybe this is doable, but I haven’t done it. It occurred to me that all the cofactors of diagonal entries in a Hermitian matrix would be themselves Hermitian, and a proof by induction would rest on this. 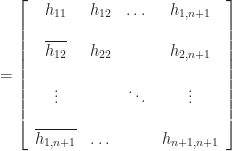 My thought was… can you construct a determinant using only cofactors of the diagonal entries?

This turned out to be not helpful in an embarassing way. I asked myself, can you calculate a determinant by expanding over a diagonal, rather than a row or column? I was able to convince myself no, but the fact that I considered it at all seemed messed up. Shouldn’t that be something I should know by heart about determinants?

Similar to a student using limits without knowing the delta-epsilon definition, I realized that I don’t have a solid grasp of what determinants even are, although I’ve used them extensively. It felt like I was missing a huge part of my mathematics education. I don’t think I had ever proven any of the properties of determinants I had used in a linear algebra course.

This doesn’t look unusual. I’ve got three books on linear algebra next to my desk here.

DeFranza and Gagliardi start by defining a 2×2 determinant as just ad-bc. It then tells how to calculate a 3×3 determinant, and then how to calculate larger determinants using cofactors. This seems in line with how I was taught (although this isn’t a coincidence. I took Jim DeFranza’s linear algebra class). The useful properties of determinants come later.

Zelinsky starts off (on page 166 of 266!) with an entire chapter on all of the algebraic properties we’d like determinants to have. It waits 11 pages to actually give explicit formulas for 2×2, then 3×3 matrices. It isn’t until after that that it gives something that feels like a definition.

Kolman starts with this definition right away:

Let A be an n x n matrix. We define the determinant of A by

where the summation ranges over all permutations

. The sign is taken as + or – according to whether the permutation is even or odd.

Woah. This seems like something fundamental. I had only known determinants as, effectively, recurrence relations. This is a closed form statement of the matrix determinant. Why don’t I recognize this?

Really, though, I can see why this might not be commonly taught. It’s even more cumbersome. But it feels like I missed the nuts and bolts of determinants while using them for so long.

That definition seems ripe for a Levi-Cevita symbol.

It’s probably not worth making most people trudge through millions of subscripts. That’s sort of the MO of mathematics, right? You make an easy-to-write definition or theorem, and then use that to save time and energy.

a keen eye for treasure.